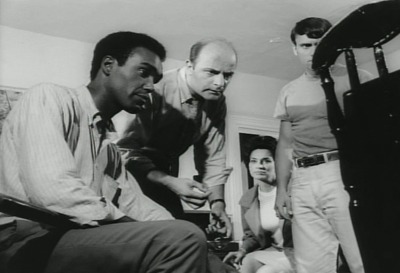 Image from Night of the Living Dead, George A. Romero 1968 – no copyright.

This is an activity similar to one I did before from this TBLT Task Ideas Linoit Board where you can get students to choose one thing from a set of limited options. For this lesson I chose eight films from the top 50 list on imdb.com and copied and pasted the story synopsis into text files. You could get your students to choose. I didn’t because I was a bit short of time for various reasons. I then set my students in groups of four to choose one film to watch together.

I ran the text files through TagAnt to tag them for parts of speech in AntConc corpus concordancer. You’ll want the TagAnt tag list handy to check grammar in AntConc.

Open the tagged files in AntConc. Check the clusters, N-grams and word frequencies (including tags). In my mini corpus I found that the most key grammar was present simple passives and also there were a lot more proper nouns than expected. I kept this in mind for Focus on Form and actually did need to focus on form on passives.

Print the untagged text files after changing fonts and tidying them in your favourite word processor. Print, cut, and pin/stick to the wall.

I had my students in groups of four take rotating turns to read for: new vocabulary, storyline, setting, and characters. For odd numbers – groups of five with two assigned to new vocab or groups of three with setting and characters both assigned to one student. Dictionary checking halfway through the task and again at the end. They then read and choose which film to watch (or which trailer to watch as homework and write about in their learning journals).

A lot of my students chose a film because ‘it was the only film we understood and liked’, which is fine, in my opinion. I told them that I don’t choose to watch films that I don’t understand the story synopses of. I also had borne in mind the number of proper nouns counted in the corpus so remembered to tell students who looked a bit stuck that if the difficult word was capitalised in the the middle of a sentence it was probably a place or a person.

It wasn’t bad but it wasn’t as good as I expected. Even with short texts. the lesson was a bit hard. Some pictures of the films probably would have been useful. Anyway, you live and learn, don’t you?

I’ve had a while to mull this over. I still think I need to stick to my initial judgement that my students need to be thrown into the unknown sometimes. Anyway, this is my attempt at an autopsy of a dead lesson.

I was stuck with a spread in a (non-academic) reading course for my university students and I asked them whether they  wanted to look at something difficult the next week. After a couple of weeks of them breezing through class material it was no surprise that that they said yes.

I used this activity from Anthony Ash’s blog, knowing it was tough. I had the learners think of words they knew about air travel and space travel.

The reading was prefaced by me telling students to just look at it first and black out what you don’t know then modelling that. Only around half the class blacked out a sufficient amount.

So, what the hell was I doing? I wanted the students to have strategies to deal with a difficult text. All students will take numerous TOEIC and TOEFL tests over the next two years. I wanted to give them tools to deal with very difficult texts. The books set by the university are extremely easy so students go into their tests thinking everything will be of a similar level. When that happens it dents their confidence. I thought that if they did it in the classroom then it would be easier to manage these affective factors.

In the end I had to have the students gather around me, see the overwhelmingly black page I had created and try to get the gist, which was successful. We then looked at the comprehension questions which were basically answered well.

What did I learn?

I don’t see it as an abject failure but, no, the students weren’t as into attacking a text they perceived as impenetrable as I thought they were and so I had to abandon the planned discussion on knock-on effects of technological innovation.

I thought it would be good to write about a failed lesson after putting in my tuppence worth on Robert Lowe’s blog.

This is a task from the TBLT ELT LinoIt board (more info on its page) that I did with my pre-intermediate reading class at university. This was a replacement task for a dull spread comparing two cities in an otherwise OK set text.

For homework they were assigned to get information about a city from a brainstormed list and print it out.

About two thirds did the homework. This was enough and I knew that I could rely on the majority of the class to generate enough content.

Aside: I did try to get some students who hadn’t done the homework to work together to try to catch up by finding 5 interesting facts about a major city but this was pointless as the lazy students were lazy and the forgetful but relatively conscientious ones did all the work instead.

I then had the students pin their printouts/notebooks/paper to the wall with adhesive tack (Blu-Tac). I then set the task: read as much as possible and rank the cities by livability.

Pairs read as much as possible within five minutes after being told reading different parts from each other would enable greater coverage. They then did the ranking exercise and reported back to the whole class on their top two and lowest one. This generated vocabulary through different pairs’ questions and also grammar awareness through written recasts on the board.

After the main bit I had the students take down three vocabulary items (chunks or words). I boarded them, corrected pronunciation and elicited student definition where possible.

The students said it was a bit difficult but that it was interesting to read up on several very different places.

Everyone has experienced a boring textbook before. In this post on her blog, Nicola Prentis gives the essential tips for ripping the guts out of a long text to turn it into a discussion.

As mentioned in her post, it doesn’t work for everything, especially horrendously boring books so if you need to work to a syllabus based on a truly awful book, here’s what I would do.

1. Is the text too long? If so, use half, or even just a third, but make sure it is still relatively meaningful after ditching the rest.

3. Analyse the grammar. Do you have a ‘grammar point’ to teach? Do certain tenses or forms repeat? How can they be used in a meaningful or useful way?

4. Plan a couple of activities where students could feasibly and naturally use the language features (vocabulary and grammar).

5. Choose which activity is your energiser and which is your main event. You should know your students, put the activities where they need to be. Energise your junior high school students before a main event where they may need to be more thoughtful. If you are teaching the same students two lessons back-to-back or coming back to them later, don’t be afraid to have the students spend time thoughtfully first before you energise them ready for part two where you might repeat this process.